It is a mountainous massif that covers 2,544 km2 in the east area of Extremadura.

Villuercas-Ibores-Jara Geopark is part of Global Geoparks programme of UNESCO:

…The Geopark  (Villuercas-Ibores-Jara) is also extraordinarily rich in natural heritage including protected birds, biodiversity corridors, monumental trees, and Biosphere Reserves, with emblematic species such as the abundant cranes and raptors linked to the quartzite outcrops of the sierras: griffon, black and Egyptian vultures, black storks, eagle owls and golden eagles…

It is a zone characterized by the biodiversity and its beautiful natural landscapes.

There are many points of interest: for example, the ancient trees called Lorera de la Trucha (in the list of singular trees of Extremadura) or the Ecological and Biodiversity Corridor arround the Guadalupejo river as well as the ZEPA (zone of special protection for birds) in the mountain range Sierra de las Villuercas 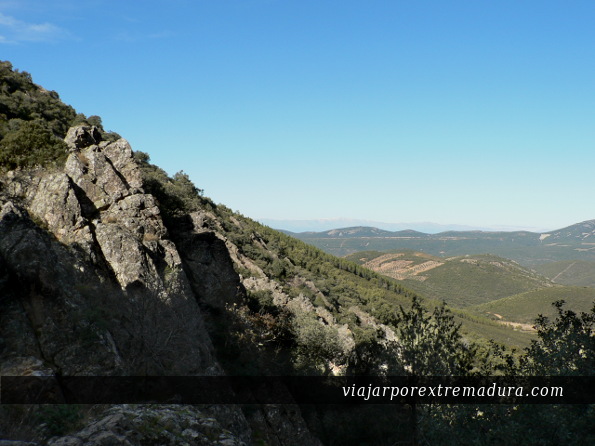 The Royal Monastery of Santa Maria de Guadalupe (declared World Heritage Site by UNESCO) is a beautiful monastery whose main buildings starting at 14th – 15th century. It is located in the village of Guadalupe.

There are many natural routes to practise walking, trekking or other outdoor activities.

The remains of the Roman temple of Augustobriga are now near Bohonal de Ibor. They were taken away few years ago from the waters of the Valdecañas reservoir.

In Castañar de Ibor are located the Castañar de Ibor Caves. These caves shows the beauty of karst, resulting in a fascinating world of shapes and colours. Visitors can not access to the caves but can get a lot of info in the visitors centre, located a few meters of the real caves.